Cinnamon Rolls In a Tube? 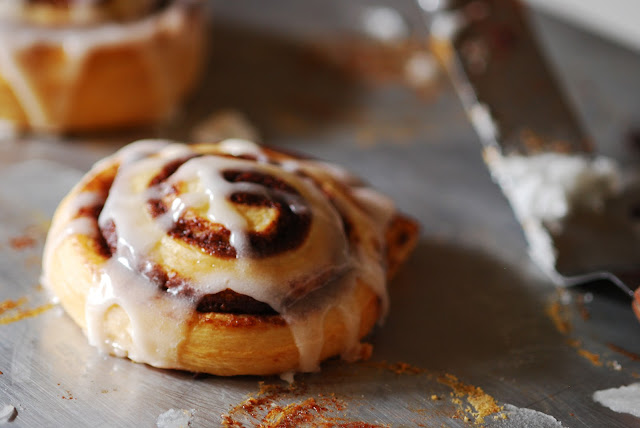 Ok truth be told, I am a little embarrassed to write this post. I am here to recommend a packaged food product.

You know those cinnamon rolls we had out of the tube when we were a kid? Well they are like that but new and improved. And to tell you the truth they are pretty good. Especially on those days when you don't have the time to wait for dough to rise.

Homemade cinnamon rolls are always better but sometimes you can settle for second best!

Rolls are not hard to make from scratch, they are time consuming and you need to have the day to plan ahead for the rising times. Other than that they are a snap.

On a recent trip to Trader Joe's the "tube" of cinnamon rolls caught my eye. I bought them on a lark and much to my surprise liked them.

There is another brand I purchased recently by Immaculate Baking Co. that are equally as good. 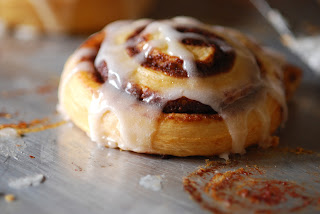 My son loves the hitting the tube against the counter edge part of the process. Even I admit there is some wicked sense of satisfaction you get when you whack the tube and the seam explodes before your very eyes.

Both kids enjoyed the frosting part!

What is it about foods from our childhood? We remember them and want to recreate those experiences.

Don't get me wrong my childhood baking experiences did not only revolve around exploding tubes of dough. My mother made delicious homemade cinnamon rolls. I remember those too. The rolling of the dough into it's perfect rectangular shape. The spreading of the butter which was soft and luscious and the funnest part the sprinkling of the brown sugar and cinnamon.

So food memories can come in all shapes and sizes create some this weekend!
Posted by laura Bednarski at 7:44 AM 0 comments 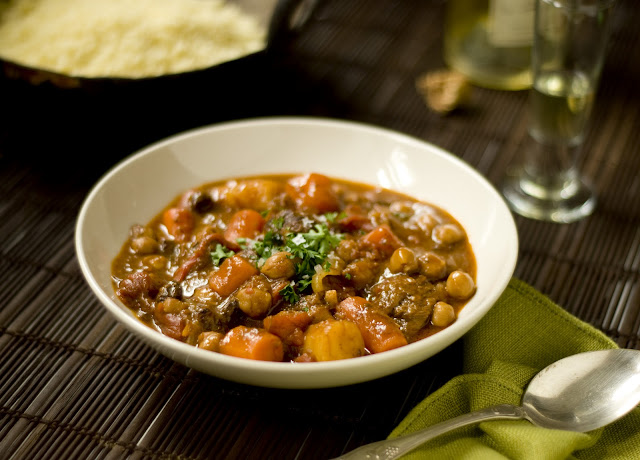 When a food stylist friend gave me this recipe of course I had to try it. Thanks Kim!
I have a recipe similar to this one that I make from the Fields of Greens cookbook. It is a North African Vegetable Stew.  This Moroccan stew is not vegetarian. Even though I am not a red meat eater I actually liked this stew a lot. I preferred the vegetables and the broth with lots of the couscous.
The dish is easy to prepare and your whole house will smell for days of aromatic spices from exotic lands. Or as my son says “whats that smell?” with a squished up nose. You get my drift. Well to me it smelled divine and I felt transported to Morocco while eating it.
Here you see the spices, whole coriander and cumin seeds being toasted. There are a few ways of toasting seeds and the preferred method for me is to use a pan on top of the stove. That way I can babysit them and adjust the heat as needed. As we all know toasting seeds in the oven can be disasterous. You put them in the oven go do a hundred things around the house and then you smell them and start screaming and running to the kitchen like a crazy person. Oh you don't do that? Never mind!
Spices are expensive, as well as nuts, so when I toast I don’t leave the stove. It really doesn't take long plus I like to do a lot of swirling of the pan to insure even browning. The oils come out when toasting adding a depth to the flavor of your dish. 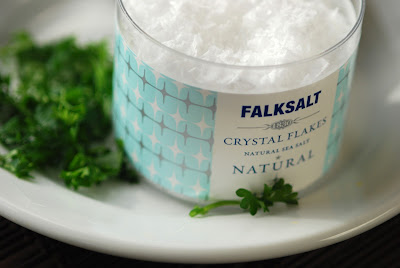 This salt I splurged on at a local specialty store. It is FalkSalt from Sweden. I don’t salt my food a ton when preparing just lightly. When I serve a meal I put some salt in a small bowl and have the guests salt their own food. To me seasoning is a preference. I may adjust the seasoning to my taste buds and it will not match the taste buds of my guests. Plus a community salt bowl is a nice touch. I like to garnish with a sprinkling of salt. Today there are so many exciting salts and this one I had to try. It is in a flake form from pure Mediterranean sea water. The packaging is gorgeous as well.


In a dutch oven heat oil over medium-high  heat. Add beef cubes in batches and cook stirring adding a bit more oil if needed to prevent sticking. Transfer to platter or bowl.


Reduce heat to medium . Add onions, carrots, parsnips to pan and cook, stirring for about 7 minutes. Add garlic, peppercorns, cinnamon stick and toasted seeds and cook for one minute while constantly stirring.
Add flour and cook for another minute.


Add tomatoes, paste, stock and wine and bring to a boil, stirring. Here is where the thickening happens. Salt to taste.


Now place all ingredients* into a slow cooker. Cover and cook on low for 8 hrs or high for 4 hours.


*When I slow cook stews I do not keep the vegetables in the whole time. The meat will be tender and the veges will be overcooked. Play it by ear. Usually about 1/4-1/2 of the time will do.


When stew is done, before serving, add cayenne to lemon juice and dissolve. Add to stew. Garnish with parsley and salt flakes if desired.


Posted by laura Bednarski at 9:16 AM 0 comments


Posted by laura Bednarski at 6:38 AM 5 comments 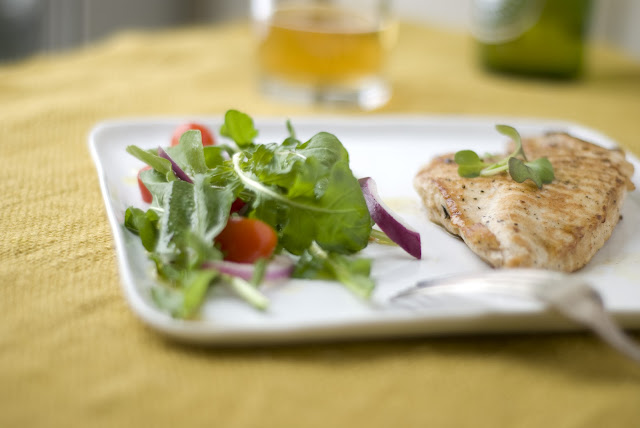 pail·lard  [pahy-yahr, pey-]
noun
a scallop, especially of veal or chicken, that is pounded flat and grilled or sautéed quickly.


Yes what a lovely word it is. So French and delicious.

If you are looking for a light refreshing dinner meal this is it. This recipe is from the Food Network site. The chef Bobby Flay. I love his recipes. I can honestly say I have not prepared a recipe of his I did not like.

Find chefs who have your taste buds. When you are tired and don’t feel like reinventing the wheel they are your go-to. Websites like Food Network and Epicurious are fabulous resources for recipes.

As I have said before, it is the quality of the ingredients simply prepared that makes the dish. So great dinners can be so easy.

This recipe is a perfect example of that. Get some good quality organic chicken, best extra virgin you can afford and nice fresh arugula, tomatoes, and you are good to go.

For this recipe, the chicken is pounded flat (see definition above) this tenderizes and also makes for a quick cook time. It is lightly marinated in lemon juice, shallot and olive oil to give it a zing. Served with the arugula salad it is light and refreshing.

In the winter I still grill. Either on my small Weber charcoal grill that I use on the screened in porch when it is not too sub zero. Tonight was one of those sub zero nights so I went indoors with my le creuset grill pan made of cast iron that goes directly on the double burners.

Today’s weather was a bit of a challenge when shooting. It was our first blizzard of the year. The snow was coming down about 1 inch per hour. The sky was pretty dark however all the white helped give some nice light.

The tricky part about natural light is you can have good light in one window and then by the time you are set to shoot it changes.

I set up the shot by an easterly window and then proceeded to prepare the food. By the time I got ready to shoot, my light was different. It was flat and not exciting. So I walked around to the front of the house with my plate of food. Yes it was about two stops brighter there. Very quickly I reset up the entire set there. My dogs thought I was crazy and could not stop smelling the chicken as it whizzed by them.

When you are doing both styling and photographing it is tricky. I don’t have time to dilly-dally. The food will only be good for so long and then you’re done.

I prefer hand holding my camera however today was too dark. I guess I could have gone to a higher iso but  don’t want to sacrifice sharpness. So I went on my tripod for safety.

When approaching a plate of food I start playing around with angles and keep changing until the food looks best. Just like when shooting anything else. People have a good side and a bad side food is no exception.

The chicken was flat so shooting straight into it was most flattering to me. Plus there was nice light coming through the arugula. Always a bonus.

When I shot from a higher angle the white plate was sticking out too much. I wanted the focus to be on the food not the plate.

For those of you who shoot at home or in a studio I would be curious to know if you have a favorite place to shoot? What kinds of things do you do in low light?

1/4 cup fresh lemon juice
1 small shallot, chopped
1/4 cup extra virgin olive oil
1/4 tsp coarsely ground black pepper
4 boneless skinless chicken breasts, pounded thinly
salt
1/2 lb arugula
2 ripe beefsteak tomatoes, or if out of season use grape or cherry tomatoes, diced
1 small red onion, peeled, halved and thinly sliced
2 Tbsps red wine vinegar
2 Tbsps extra virgin olive oil
lemon halves, for garnish
micro greens-garnish (in photo)
Whisk together lemon juice, shallot, olive oil and black pepper in a large baking dish. Add chicken that has been pounded flat with a meat mallet. Be sure to remove the tender. Refrigerate for 30 minutes. No more or else the lemon juice will break down the meat.
Preheat your grill to high. Remove chicken from marinade, season with salt on both sides and grill for 2-3 minutes per side or until golden brown and feels done to the touch.
Combine arugula, tomatoes and onions in large bowl, toss with the vinegar and oil and season with salt and pepper to taste. Place each paillard on a large plate , drizzle with extra virgin olive oil and serve along with the arugula salad.
Garnish with lemon halves or as I did in the photo with some micro greens.
Enjoy and thanks to Amy for my photo critique!!
Posted by laura Bednarski at 8:41 AM 0 comments

Hi! My name is Laura Bednarski. I started my professional career as a food stylist in Chicago. As an artist I am always evolving and exploring new sides of my creative self. While at home raising my children I rekindled my love behind the camera and started photographing food in my home studio.